How it all began

When Russian retail was only just starting to go online, Denis Lagutenko, a twenty-five year old graduate of the MIEM with a degree in engineering, opened his first Internet business. Along with a partner, he was selling laptop bags, phone cases and other small items.

The stores were developing slowly, and one thing was clear: the traditional methods of promotion were not enough to keep up with the digital market. Denis needed an alternative and that is when he learned about affiliate marketing. With the help of his fellow webmasters, Lagutenko began to test affiliate networks as a new channel for finding customers.

“Every business needs traffic,” claims Lagutenko, “and it must be targeted. Affiliate marketing is effective precisely because it works mostly on the Cost Per Action (CPA) model. It means that payment has to be made only for the attraction of customers who have taken a specific action. This is a win-win situation: an advertiser can optimize their brand promotion costs and a webmaster can calculate his margin in advance based on the source of traffic he is working with.”

The deeper Denis got into affiliate marketing, the clearer he realized that it was the future, and the ability to generate targeted leads was a profitable business asset that was worth investing in.

However, it was not enough for Lagutenko to just create a successful project. His next goal was to share his experience further and build up the expertise of other Russian specialists.

In 2014 the goal began to become a reality and the first KINZA internet marketing conference appeared in Russia, which brought together more than 1,500 participants online and offline. The event was based on the topic of making money on the Internet with contextual advertising, Yandex and AdSense, affiliate networks, links, as well as buying and selling of websites.

The main advantage of the conference was the absence of affiliation with any companies in affiliate marketing. This allowed participants to objectively evaluate the market and draw their own conclusions from the speeches of experts who were invited to KINZA solely on the basis of their achievements and professional background.

Each time the conference was getting bigger in all respects: the number of participants, speakers, and networking formats was growing. KINZA was the first event in the affiliate marketing sphere which introduced the internationally famous Speed Networking, quick acquaintances in order to get as many useful business contacts as possible. Another innovation was a special mobile app for online networking before the start of the conference.

Networking itself is a key idea around which the organization of any Internet marketing events is built. If you create all the conditions for comfortable communication, the connections people will make with each other can bring enormous profits in the long run.

“Let me share a case of one of my industry colleagues. After attending KINZA conference in 2019, he was adding clients and partners that he had met for over two years to his CRM system,” says Lagutenko. “And now imagine, these clients brought him 1.5 million rubles of net income! On average, one person attending the conference spends about 25 thousand rubles, including the ticket and all costs associated with a business trip. The benefits are obvious, which is why entire teams and even delegations come to KINZA.”

By 2021 Denis realized that his project had all the chances to expand into foreign markets, and together with his team he rebranded it. As a result, the international conference became a cross-continental forum KINZA 360. The new naming could not have better reflected the shift in positioning and the final transition from a narrower segment (SEO) to a much wider one (affiliate marketing). The first renewed KINZA was held on September 9th in Moscow, gathering over 2,000 internet marketers and for the first time in the history of the industry combining two formats: online and offline. Even the closed borders did not prevent Lagutenko from taking the event to a fundamentally new level. Forum participants could not only watch the live broadcast of expert speeches, but also connect to a special online stage, where speakers from Latin America, Britain and the Asia-Pacific region shared their experiences.

Finally, in October 2021 Dennis Lagutenko held the first KINZA forum outside of Russia, namely in Kyiv. According to the feedback from the participants, KINZA Kyiv outshone all the conferences that were previously held in Ukraine.

“Marketing and promotion via social networks also played a big role here,” Denis says. “We made it possible for  KINZA Moscow to attract the attention of the entire Russian and CIS affiliate community. Almost two months before KINZA Kyiv the organic growth of subscribers in the official Instagram account and Telegram chat was over 2000 and 1000 people respectively. The excitement about the forum was so great that we were sold out just a few days before the event and had to increase the quota from 2000 to 2600 tickets. However, even those got sold out too quickly.”

KINZA Kyiv was the first step of Lagutenko to expand the geography of the brand and increase its recognition abroad. Today KINZA is already the most influential affiliate marketing event in Russia and CIS. In the future, Denis intends to hold the forum in Central Europe, as well as to organize similar events in the United States and Latin America.

Business environment for the best of the best

“Internet marketing is a very dynamic field. Today you may be at the head of the market, but tomorrow there will be new trendsetters and you will be left behind. That is why networking can’t be limited to just attending industry conferences. Professionals need to communicate on a regular basis so that they can keep up with the news and share their expertise with each other, which will move the affiliate industry forward.”

Thus, Lagutenko had the idea of creating a private club for leaders in the field of Internet marketing, CPA.club. The project is a platform for exchanging business experience in a confidential environment. Residents of the club help each other to grow both professionally and financially. Affiliate network representatives get quality traffic, good coverage and opportunities for ongoing cooperation. Webmasters get support, the best conditions from reliable partners and the opportunity to grow among successful like-minded people.

CPA.club unites only the best representatives of the affiliate marketing with earnings from $10,000 per month. Denis is keen to make the club always a safe territory for making deals. That is why it is impossible to join it without a recommendation from at least two active members. Only a specialist, who has received strong support from the community and has brought something innovative into the affiliate sphere, becomes a resident.

“CPA.club is based on three main principles: trust, privacy and absence of management from the outside. No one but the residents themselves know how to organize their business communication in the best way, so I always bring all important issues to discussion within the community.”

The project also has its own YouTube channel, where you can find interviews with premium members of the community (from successful webmasters to owners of leading affiliate projects) as well as video reports from private events of the club and its partners.

At the moment CPA.club is the largest and most professional community of internet marketers in Eastern Europe. There are more than 350 members and the number of new applications is growing every month. Everyone who works in affiliate marketing dreams to be a member of CPA.club.

With so many different projects in his background, Denis Lagutenko has quickly become an influencer for the community of Internet marketers in Russia and the CIS. In 2019 he was recognized as the best business blogger according to the Fashion People Awards. At the moment, Denis’s Instagram account has more than 450 thousand followers, who actively follow his professional and personal life.

Lagutenko is invited as an Internet marketing expert by influential media outlets in Russia and the world, such as Lenta.ru, Fontanka.ru, Profile.ru, Investing.com, The London Economic and Entrepreneur, as well as YouTube channels and business clubs. He recently became a member of the jury for the acclaimed Business Success competition for entrepreneurs, where he judged finalists in the “Best Internet Project” and “Digital Economy” categories along with leaders of prominent Russian companies, including VTB, Otkritie Bank and OPORA RUSSIA, the largest association of entrepreneurs.

“For me, judging experience is an opportunity to look at my expertise again, but from a different angle,” Lagutenko admits. “When you are near the best entrepreneurs in the country and you analyze projects of young specialists together, you involuntarily assess your level of knowledge, compare it with others, take something to your notice and, as a result, find new points for growth. That is why I advise all startups that want to make a name for themselves not to be afraid to take part in such prestigious competitions. This is the same networking that gives you an invaluable chance to build direct communication with the most talented entrepreneurs, which usually takes years of hard work.”

Denis himself and his contribution to the digital transformation of modern business have been recognized by Investment Leaders and Digital Leaders awards. The latter was especially significant for Lagutenko because he and his agency ADSbase won in the “Digital Leader of the Year 2020-2021” nomination, leaving behind 1C Bitrix, Rostelecom, MGTS and Yota.

“It is possible to reach certain heights if you really like what you do. I am always looking for opportunities to realize my potential and make the world around me better. And I find these opportunities by developing my business in affiliate marketing.”

Denis Lagutenko is going to expand the horizons of internet marketers all over the world by not only organizing his own industry conferences but also by speaking at the biggest international events, such as Traffic&Conversion Summit and Affiliate Summit. He has already given presentations for SYNERGY DIGITAL FORUM, Affiliate Conference and CPA Life, where he told about current trends and effective market entry strategies for those who want to take their place in the affiliate marketing world.

For now, Denis Lagutenko plans to develop current projects and create new companies in the USA, helping local advertisers and marketers brush up on their professional skills. According to the entrepreneur, requests for cooperation from American companies are already coming in, which is not surprising, because the affiliate marketing industry is growing rapidly. 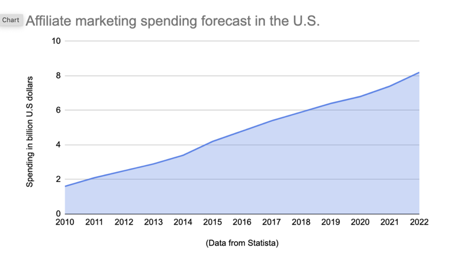 Since the pandemic came, the e-commerce sector has been rising steadily, and consumers are becoming more and more accustomed to making transactions online. By 2022 the U.S. affiliate market may exceed $8 billion, which means that the field really needs more quality specialists.

“The digital world is immense,” assures Denis. “If you have a good understanding of advertising platforms, such as Google or Facebook, and know how to properly handle traffic so that it brings in real leads, all the doors are open to you. This is what I like about affiliate marketing: here your business has no boundaries.”

2021 TECHTIMES.com All rights reserved. Do not reproduce without permission.

Like Loading...
Tags
a Affiliate and became came denis how in industry lagutenko leader Marketing the to

How to start with affiliate marketing